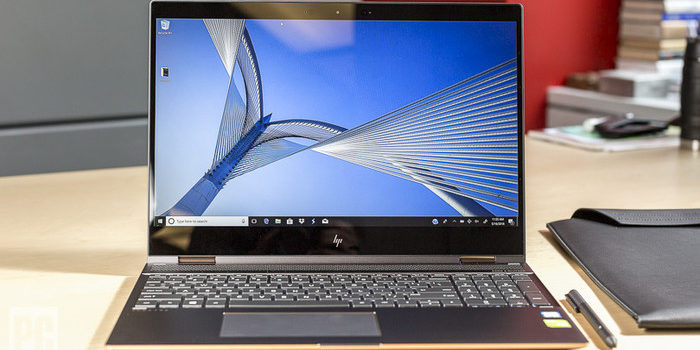 HP’s popular Spectre series of two-in-one laptops has seen a huge uptick in features and usefulness with the recent 2019 model. Sporting a gorgeous 13-inch display and three different viewing modes, there’s a lot to love about the newest Spectre. The question remains: is it worth the hefty price tag, or are there better deals for your money?

This is a stylish, sleek and all-around classy device. The all-metal encasing is very eye-catching, and the gem-cut corners add an air of elegance that you don’t often find on laptops. This would look right at home on a professional’s desk, in a coffee shop or in a lecture hall. In fact, it might look a little too fancy in shabbier surroundings!

As a two-in-one, this is a highly portable device. It barely weighs three pounds, so it’s easy to toss it into a bad and take it on the go with you. The touch screen is responsive and looks great, though it’s a little hard to see in the sun.

The Spectre x360 also sports three distinct viewing modes, making it a flexible and easy-to-use device. Whether you need to be productive, want to kick back and watch videos or just need a tablet for some fun games, the Spectre can accommodate.

The most impressive aspect of the Spectre, however, is the huge battery life. If you’re going to be spending a lot of time far from any charging ports, this is the laptop for you.

It’s worth noting that the 2019 13-inch Spectre x360 also touts a premium price tag. The two-in-one starts at $1,150 for just the basic model, while additional storage space or a better CPU can run you a few hundred more.

That said, even the base version of the laptop comes with a nice leather sleeve for the device, as well as an active tablet pen for drawing and taking notes. All in all, if you’re looking for a powerful, sleek and long-lasting two-in-one, the Spectre x360 is the computer for you.